JONATHAN M. HICAP
Manila Bulletin
MANILA, Philippines – The 22-year-old male contestant on reality TV show “Korea’s Got Talent,” who was laughed at by the audience for being a manual laborer, has been hailed by world media as the next Susan Boyle with his audition video on YouTube getting 6.2 million views. 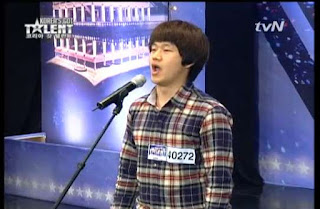 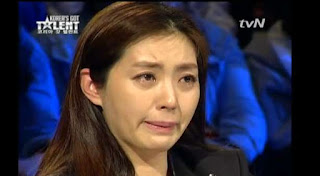 In the Korean entertainment industry where good looks and fashion sense count, Choi Sung Bong was described as the antithesis.
Choi appeared during the first episode of “Korea’s Got Talent” last June 4. Sporting a bowl haircut and flannel long sleeve shirt, Choi was not considered star material when he walked on the stage to introduce himself.
But the audience and the judges started warming up to him when he told them his sad life.
During the audition, Choi told judges musical director and stage actress Kolleen Park, actress Song Yun-ah and theater director Jang Jin about the hard life he experienced growing up.
Song was curious why Choi didn’t put anything on the “family” part of his application. Choi said he was left in an orphanage when he was three years old but he ran away when he was five because he experienced beatings from the people in the institution.
Fending off for himself, Choi said he lived by selling gum and energy drinks on the street, which went on for 10 years. He said he would sleep in public toilets or stairs like a fly.
Inspired by a singer he saw perform at a night club while he was selling gum, Choi said this started his dream to become a singer.
He said he didn’t go to school and took qualifying tests to get his diplomas, although it was eventually uncovered by Korean netizens that he, in fact, graduated from the Daejeon Arts High School.
Netizens accused cable channel tvN of leaving out this important detail to draw sympathy for Choi, an accusation denied by the TV station.
But the most important thing was Choi’s powerful and moving rendition of the classical song “Nella Fantasia."
As he started singing, everyone was in awe. His operatic voice left judges Song and Park and the audience in tears.
“I want to give you a hug,” Song told Choi, who passed the audition and will be included in the next round of competition.
A YouTube video of Choi’s audition has become viral. As of today, the video has 6.2 million views, earning honors as one of the most viewed, top rated, most discussed and a top favorite on the video website.
Different media outlets praised Choi for his outstanding talent.
In an article, TIME.com said, “Though without Rain's killer abs or Asian pop-star moves, this bushy-haired Korean twentysomething is putting viewers around the globe in tears.”
Celebrity blogger Perez Hilton wrote, “Such an inspirational story and performance, you just have to watch it. We wish you all the luck, Sung-Bong Choi!!”
“Choi's voice simply astounds, proving that you really never know who has an amazing talent,” according to the Huffington Post.
Original article:
http://www.mb.com.ph/articles/322755/korea-s-got-talent-contestant-becomes-toast-media-youtube-sensation