In the “Entertainment Era” corner on the episode of “Live Info Show” that aired on June 15, the cameramen paid a visit to the place where singer Lee Joon’s commercial for underwear was being filmed. 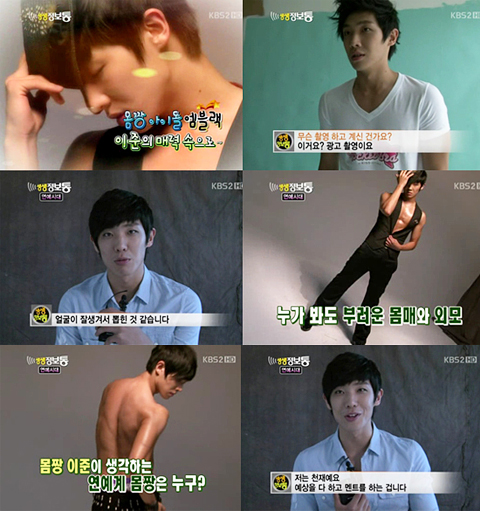 Asked about the reason he was chosen to be an underwear commercial model, Lee Joon, a member of five-member dance group MBLAQ with the nickname of “an all-round idol,” joked, saying, “I was known for my good physique.

But I think I was really chosen for my handsome face.”Lee Joon is an idol known for his attractive physique. Who then did he think is the star “momzzang" (a man with an attractive physique) in the entertainment world? Lee admitted singer and actor Rain is the top "momzzang," saying, “My older friend Rain is absolutely the best.”
He revealed that his special method for keeping his body in shape is to not eat spicy, salty and fried foods and to exercise every day for at least ten minutes. Lee Joon has shown off his firm abs on many programs and has been adored by female celebrities including Kim Jun Hee and Je A. One of the reasons for his popularity -- aside from the abs -- is his wackiness.
Regarding his unique personality, he said, “I saw an article recently that says my IQ is under 100. However, my foolish image was created intentionally.” He added, “All my lines are deliberately thought out.” Viewers expressed great expectations for his future endeavors. (KBS Global)