2013 Hallyu Forum to focus on film, cooperation between Korea, Philippines

By JONATHAN HICAP, Manila Bulletin
The film industries in South Korea and the Philippines and the cooperation between the two countries will be the main topics at this year’s Hallyu Forum, which will be held on Sept. 17 at Pandanggo Hall of the historic Manila Hotel.
Korean Cultural Center in the Philippines (KCC) will be holding the Hallyu (or the Korean Wave) Forum as the launch pad for the 2013 Korean Film Festival in the country. 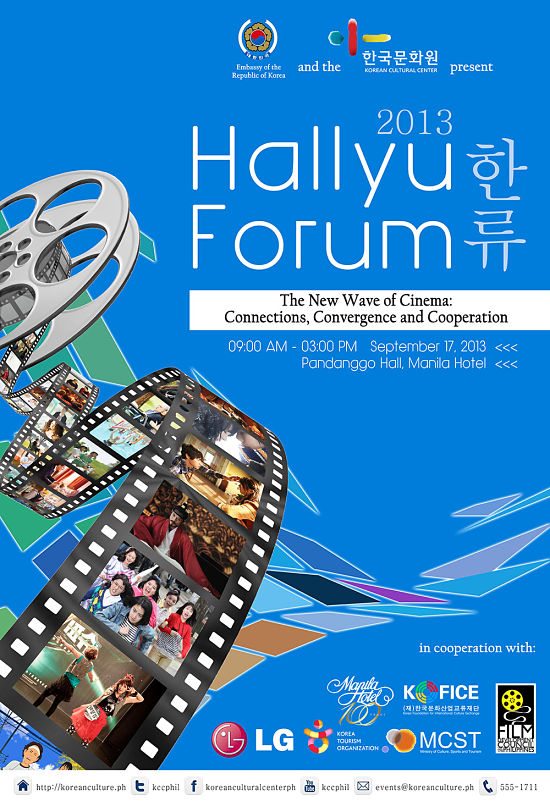 “Hallyu Forum 2013: The New Wave of Cinema” is organized by the KCC Philippines in cooperation with the Ministry of Culture, Sports and Tourism (MCST) of Korea, the Korea Organization of International Cultural Exchange (KOFICE) and the Film Development Council of the Philippines (FDCP).

This is the second year that the Hallyu Forum is being organized. Last year, the inaugural forum focused on the impact of Hallyu on the Filipino psyche.
KCC Philippines said the word “Hallyu” is derived from two Korean words: “Han” for Korea and “Ryu” for waves; it was originally coined by the Chinese media to describe the growing popularity of Korean dramas imported to their country.

Hallyu has a strong following in the Philippines especially in the form of K-pop music, Korean dramas and the yearly Korean Film Festival.

According to the KCC Philippines, the first panel of the Hallyu Forum will focus on the Philippine film industry.

Patrick Campos of the UP Film Institute and Dean Roland Tolentino of the UP College of Mass Communication will serve as discussants while Tito Genova Valiente, head of the Gawad Manunuri ng Pelikulang Pilipino, will be the reactor.

Isabel de Leon, lifestyle editor of the Manila Bulletin, will also be part of the second panel as a reactor.

Identifying the areas of cooperation between Korea and the Philippines will be discussed in the final panel.

Panelists are Filipino director Pepe Diokno and Korean producer and director Jonathan Kim, who is the president and CEO of Dyne Film.

Jag Garcia, chair of the Digital Filmmaking for the De La Salle-College of Saint Benilde, will be the reactor.

Other sponsors of the Hallyu Forum are the Manila Hotel, the Korea Tourism Organization and LG.

Link to my original article on Manila Bulletin online:
http://www.mb.com.ph/2013-hallyu-forum-to-focus-on-film-cooperation-between-korea-philippines/

Email ThisBlogThis!Share to TwitterShare to FacebookShare to Pinterest
Labels: Hallyu