As early as 8 a.m. last Sept. 7, many Filipino fans were already at Araneta Center in Quezon City for the K-pop Republic concert, one of the most anticipated K-pop events of the year.
One of the them was 13-year-old Erica Ocampo, who came from Malolos, Bulacan. 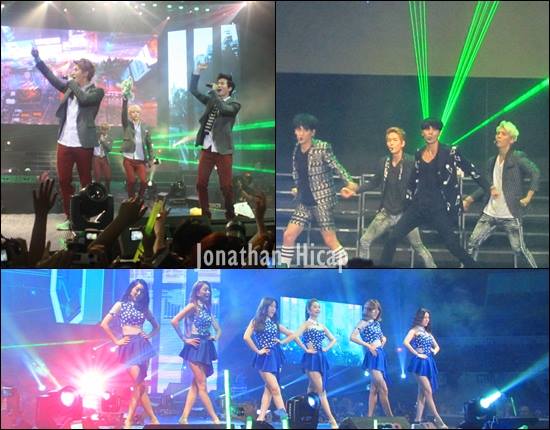 She’s with her schoolmates Erilie Angostura, 15, and Eos San Gabriel, 15, and they were all wearing EXO t-shirts.
The K-pop Republic concert showcased SHINee, EXO-K and Dal Shabet.
Ocampo said she’s been a fan of EXO for almost a year and her favorite is Chanyeol.
“I love him because he’s dumb cute, has big ears and he’s really talented,” she told Bulletin Entertainment.
Angostura roots for D.O., or Kyungsoo, whom she describes as “so cute,” while San Gabriel’s favorite is Sehun. The two said this was their first time to watch a K-pop concert and they were very excited to see the show.
The K-pop Republic concert, organized by the Philippines’ All Access Productions and Korea’s JU Entertainment, ran for two hours.
Soomin, a member of girl group April Kiss, and hip-hop duo Crispi Crunch, composed of Cheezy and CSP, were the opening acts at the concert.
They were followed by Dal Shabet, composed of Serri, Ah Young, Woohee, Jiyul, GaEun and Subin. This was Dal Shabet’s first performance in the Philippines but their second visit to the country.
The girl group, which debuted in the K-pop scene in 2011, performed their songs “Supa Dupa Diva,” “Bling Bling,” “Be Ambitious,” “Mr. Bang Bang” and “Have, Don’t Have.”
The crowd shouted and cheered as the girls sang and danced in their sexy blue outfits.
Next up was EXO-K and the crowd went wild as the boy band sang their first song “Wolf,” the title track of EXO’s first studio album “XOXO,” released last June. They also sang “History,” “XOXO,” “3.6.5″ and “Growl.”
In between their performance, EXO-K threw stuffed toys to the crowd. They also sang a line from “Hawak Kamay,” a Filipino song EXO performed at the Dream K-pop Fantasy Concert held in the country last January.
Since debuting last year, EXO’s popularity has skyrocketed. The boys made history when the original and repackaged editions of their album “XOXO” sold more than 700,000 copies.
Their popularity was visibly felt during the concert as the fans cheered and shouted with their every move.
EXO fan Raina Laza said her favorite moment was when “we started jumping and singing along.”
“My bias, EXO’s Kai, made me fall for him harder because he has unleashed the Kim Jongin (Choding) side of him while performing. He gives off this mysterious aura which attracted me and made me wonder if he can act cute. Good enough, he pulled that cute side well,” she said.
As the closing act of the concert, SHINee showed that their status as one of the top boy bands in the business has not waned.
Despite that Minho was not with them at the concert because of other commitments, SHINee’s Jonghyun, Onew, Key and Taemi gave their best.
SHINee performed “Dream Girl,” “Lucifer,” “Beautiful,” “Stranger” and “Why So Serious.”
Filipino fans had been waiting for SHINee since the first time the group visited the Philippines in 2009.
Fan Sherry Reyes said she was mesmerized by SHINee’s performance.
“They were all good and handsome especially Jonghyun,” she said.
SHINee promised that they will come back to the Philippines.
Laza added, “The Philippine K-pop fans are truly amazing for bringing the hype to the highest level! It felt like we were partying nonstop inside.”
After the concert, fans made requests for solo shows of their favorite K-pop groups.
The excitement has not died down and the organizers of the concert has already announced that that they will bring back EXO for a solo show next year.
They said the next show “will be even better.”
“You’ll be surprised,” the announcement said.
Link to my original article on Manila Bulletin online:
http://www.mb.com.ph/k-pop-republic-leaves-fans-wanting-more/